Embrace my skills as a Creative Ninja!

Few things are as important for creativity as spending time devoted to cross-pollination with fields outside ones area of expertise.*

Cross-pollination of a marketing image, when done skillfully, will convey a dramatically more powerful story than if an emotionless, average, predictable image was employed. It’s the story behind the image that adds power to the “content” of the image. Both past and current studies of neuroscience support this premise. Expanding your graphic repertoire isn’t something you can do simply because you “want” to. It’s a matter of learning techniques from behavioral science…and your lifestyle. Sometimes it’s just supported by different technologies and their use of research and evaluation.

*Quote above appeared in the Wall Street Journal on March 12, 2012 from Jonah Lehrer, author of Imagine: How Creativity Works, the Bible of understanding Cross-Pollination. 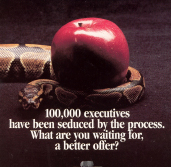 100,000 EXECUTIVES HAVE BEEN SEDUCED BY THE PROCESS…
CLIENT: 2CONFER

YOU CALL IT WRECK AND REBUILD. WE CALL IT REENGINEERING.
CLIENT: NETG

WITHOUT PAN/LCM, YOUR PROGRAMS MAY TAKE ON A LIFE OF THEIR OWN.
CLIENT: COMPUTER ASSOCIATES

A few of our clients, above and below. 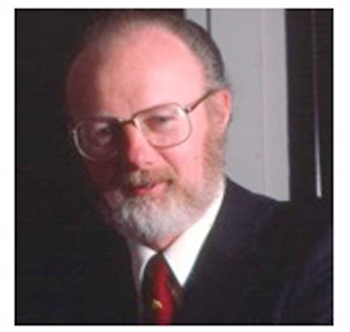 Marshall McLuhan was wrong. Dead wrong.
In 1964 he said “The medium is the message” and since then, facile-minded people have run with that, again and again, and most recently with social media.
My mission is to correct the damage done by McLuhan and his followers. And this includes

What counts is the Message, not the Medium.
It’s time Social Media marketing was put in its place!

positioning social media into its proper role within the world of BtoB marketing tactics.
The reality is that The Message (content) drives the Medium, not the other way around. The Medium (conduit) must always serve the message.
People are influenced by the content of the Message not the “package” in which it is delivered. Social media plays a secondary role behind the Big Idea, the heart of marketing’s Creative Strategy that determines success or failure.
McLuhan’s statement is that he feels the vehicles for distributing marketing messages (social media) are more important than the messages (ideas) themselves. Seriously?

My ambition is to restore yesterday’s emphasis on the power of the Big Idea, known as the lightning bolt that has been employed for decades in building persuasive concepts. The curation of social media can impact the message, but it can’t create it.
My passion is to help today’s    BtoB marketers understand the importance of gathering the social input (called Content) reworking and strengthening the creative component, and then using the media simply to redistribute.
As for McLuhan…point made!
Without content medium’s a hollow pipe.

What my clients have to say…

“Keith is one of those rare breeds of consultants that has always exceeded my expectations.

When we were a small unknown systems integrator his strategy and execution contributed mightily to our being recognized by Systems Integration Magazine as “best in class” .Oak Stevens, past President of KDM Assoc., currently Director, KPMG.

“I recommend Keith to any software or high tech company that wants to improve their reach and stature in the market,

and who wants to spend their marketing dollars to achieve the most bang for their buck.” Gary Rippen, March 24, 2010

“One of the original superstars of the technology marketing world….

Cannot begin to tell you the impact this man has had on companies like Pansophic all the way to Platinum technology, inc… The best of the best….”Andrew ‘Flip’ Filipowski, hired Keith to help launch DBMS, Inc.

His knowledge, experience and creativity are unique assets to our business.” Wm. Edward Vesely, hired Keith for Marketing Services in 2007

Brand challenge: At one point the company suffered from a low profile in the emerging IBM midrange MRP market although it had a broad range of superb software applications. Problem: Wrong USP (Unique Selling Proposition): Steps that were followed: A thorough product study revealed that JDE was offering the market something no one else was, but didn’t realize its significance. At a time when software was sold either off the shelf, or requiring expensive modifications JDE software was designed in such a way that end users could do the mods themselves. Also intense media analysis suggested that vertical business publications were much better suited for their ads than the technology magazines currently being employed. Measurable results: Sales, which had been at a plateau of about $15 million for three years, leaped 400% over the next three years to approximately $60 million. Overview: Ed McVaney, chairman of JDE and I became friends over many years attendance at ADAPSO events. After three years of flat sales (couldn’t get over $15 million) he asked for my help. I discovered they were in all the wrong media (tech pubs vs. end user pubs), their sales force did not relate to–and was disenchanted by–the corporate messaging (solved by inviting their participation in creative assessments), and worst of all, they were not even promoting what the market was screaming for … which JDE had and no else

did (an MRP engine that was programmable by users!). In addition I redesigned the company logo and took over corporate branding. After KBA assumed responsibility for all sales and marketing communications sales jumped approximately from the plateau of $15 million to $30 million the first year, to $45 million the second and $60 million the third. After a few more years they hit $1 billion and ultimately ended up being acquired by Oracle.

Brand challenge: The initial launch of IBM’s DBMS DB2 fizzled for lack of a focused communications effort. They were competing with other relational DBMS including the powerful Oracle product. Problem: Wrong USP (Unique Selling Proposition): Steps that were followed: After several meetings with IBM at KBA Keith was hired to refine the Marcom strategy. Extracting subtle messages from a McKinsey study that we were handed we positioned them as the only product offering “industrial strength” a concept which was welcomed by the market and caught on quickly because of the existing perception that only hierarchical DBMS offered heavy lifting. KBA was then appointed to work with Wells Rich and Greene, IBM’s ad agency for corporate and software, to develop the creative strategy. Measurable results: As they say “the rest is history”. DB2 is considered today the leading relational DBMS locked in an ongoing duel of giants with Oracle. And while Bates had no access to numbers he was told that his strategy had a positive impact on $8 billion in sales.