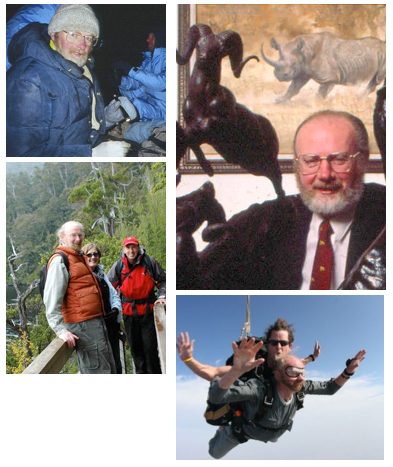 I’m a freelance Creative Strategist/CMO On Call with skills evolved from 20+ years of acting as both CEO and Creative Director for a multi-million dollar ad agency which served the sales and marketing needs of more than 200 tech vendors.

“For prompting creativity, few things are as important as time devoted to cross-pollination with fields outside one’s area of expertise.”  In addition to being a creative strategist I’m an adventurer and I’m simply following the truism in the quote above from a Wall Street Journal article.

I took their advice and visited all 7 continents, 55 countries including Tajikistan and Siberia, visited Mt. Gorillas in Rwanda, climbed Mt. Kilimanjaro, flew around the top of Mt. Everest, visited Tiger Tops in Nepal to watch elephant polo, piloted a single engine plane from Chicago to Anchorage,  skydiving, hot air ballooning across the Serengeti, zip lining in Puerto Rico rain forest, early day drag strip racer, participated in a Paraguayan government jaguar darting study, got a small role in a Hollywood movie about the Korean war, founded 7 companies, attacked by a lion in Botswana, published a book on word-of-mouth-marketing, invited to visit Disney studios by Walt Disney himself, studied remote cultures including Australian Aborigines, Arctic Inuits, and Kalahari Bushmen, taught jet engine theory in the USAF, dated a movie actress, have ridden elephants in Africa, camels in India, flew a jet fighter, member of the Chicago Adventurers Club, the Explorers Club, and the Royal Geographic Society.

Each of these experiences has contributed to the unique perspective I bring as a Creative Strategist, which I have applied to over 200 clients.